Some rumours have been circling around the automotive industry recently after Youngman Lotus unveiled their new T5.

It was shown at the Auto China 2012 and analysts and enthusiasts believe that the new T5 could well be the platform that will become the first SUV from Proton not long from now.

The T5 that was shown at the event is one that shares the same wheelbase as the Proton Gen-2 which is also the model of its platform while a 4-wheel drive model is in the books. The front-wheel drive vehicle is in pre-production and for the China market, it is set to come with 2 engine choices which are the Campro CPS and the CFE turbocharged version which will be powered up with 1.6 liter engines. Under the agreement, the Campro engines will be built in China who will pay royalties for the license to Proton.

According to Proton MD Datuk Seri Syed Zainal Abidin, talks are ongoing and it anything materialises the T5 might well be the first SUV for the national carmaker through the joint-venture of Proton and the China-British agreement. To date, not confirmation has yet been announced for the T5s but it is estimated to be priced around RM55,000 and RM65,000 which might just be the bracket for the Malaysian market. 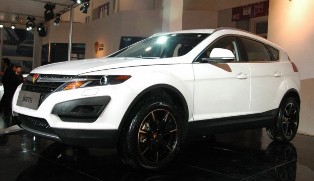