He then went on to talk about it on his blog site and this will surely get everyone buzzing from the 1.6 liter turbo engine vehicle. According to his report, it comes with a push-button start-stop system, an automatic speed wiper sensor function, a hot press steel build, automatic folding wing mirrors and headlamp sensors and such. It also comes with an impact sensing door lock with central locking while a GPS navigation system is built in too. Paired with the turbo engine is a CVT gearbox that comes with a 7 speed virtual manual mode while you also get a tiptronic shift lever system and shifters too.

Word has it that it will be the Proton Tuah as seen at the 2010 Kuala Lumpur International Motor Show so you can bet that the design will be similar as such. ABS with Brake Assist is also fitted and according to Tun, it will be the top of the line model which means that they will be rolling out some middle and low range models too. No confirmation if it is coming out soon but many Tun did mention that it is scheduled in 3 months’ time which means it might be available around May, so keep your calendars in check. 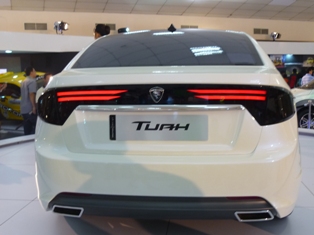