Red Bull Racing’s Sebastian Vettel showed everyone why he is the world champion when he finished the season opener 2011 Australian Grand Prix on top, beating the likes of former world champion Lewis Hamilton of McLaren Mercedes who finished second. Vettel started the race on pole position and took good his lead from the start where he was very much in that position throughout the 58 lap race.

Lewis Hamilton, who is out to make his mark on the McLaren tried in attack but failed to overcome a resilient Vettel who is adamant to keep his crown this year. But the highlight of the race would be from Vitaly Petrov of Lotus Renault who finished third. And he did that in spectacular fashion, fending off the offensive manoeuvres of another former world champion Fernando Alonso of Ferrari in what was seen as a repeat of last year’s final race. Petrov, who held on Alonso last season caused the Ferrari driver to fail to win the title, which eventually went to Vettel.

It was a heartbreaking day for the Sauber drivers Sergio Perez and Kamui Kobayashi who finished on seventh and eighth place respectively were disqualified and stripped off the points by the FIA for breaching technical specifications on their cars. This means that Felipe Massa from Ferrari who had finished on ninth place now takes over seventh with Buemi on eighth and Adrian Sutil and Paul di Resta from Force India finishing within the points.

Last year’s first runner up, Mark Webber from Red Bull could only finish the race in fifth in his home race despite trying to outdo Alonso for most of the race while Jenson Button finished sixth. Nick Heidfeld of Lotus Renault, who replaces Robert Kubica finished twelfth with Jarno Trulli of Team Lotus coming behind him. It was yet another bad outing for 7 times world champion Michael Schumacher who had to retire in lap 7 due to a puncture while Hekki Kovalianen of Team Lotus also went out due to a mechanical problem. Rubens Barrichello and Nico Rosberg from Williams too were out in the race which saw a lot of brushing-by with the highlighted one involving Jaime Alguersuari of STR-Ferrari and Schumacher who eventually caused the German to retire. And that kicks off the F1 season, next up Sepang! 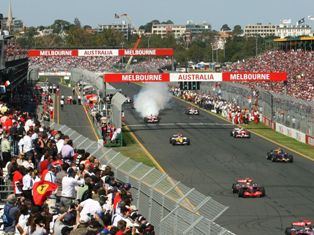