American automotive giant General Motor recently rolled off the covers on their new Chevrolet Mi-ray Concept at the recent Seoul Motor Show and this is their tribute to the brand’s sports car heritage. It draws its inspiration from the 1963 Monza SS which they say is ‘small and open’ as well as from the 1962 Corvair Super Spyder which was made ‘light’ and purposeful.

The name comes from the Korean word ‘Mi-Ray’ which means ‘future’ and this is what they are looking to achieve with this concept is to look at what the future might be like for GM Korea. After all, this concept was developed at its Seoul’s GM Advanced Design Studio. It apparently is made integrating the hybrid propulsion technology, advanced design and styling as well as keeping true to the GM’s design language as it heads towards its centennial celebrations this year.

This concept is powered up with 2 front-mounted electric motors which churn out some 15-kilowatt while there is a 1.6 kilowatt-hour lithium battery pack which uses regenerative braking to charge up partially. It is also fitted with a 1.5 liter turbocharged, 4 cylinder engine paired with a dual-clutch transmission gearbox. So if you are driving this car, the electric motor will be activated for initial acceleration as well as when you are cruising but when need more power, it is in the control of your hands to switch to the petrol engine. Speaking of control, you can also choose between using the front or rear wheel drive.

The body of this concept is made using mostly carbon fiber components which means it is very light and strong. It also comes with ambient lighting along both sides of the body. At the rear, you get individual storage compartments on each of the rear fenders. For better downforce and aerodynamics, you get carbon fiber spoilers on all of its 4 corners. On the interiors, you get white fabric, leather and some nice looking ‘liquid metal’ surfaces all around. GM has created the so-called ‘sculptural velocity’ concept with the application of brushed aluminum on certain parts. There is a back—projected screen where you get the important data of the car while they have also included rear-view cameras which are fully retractable. 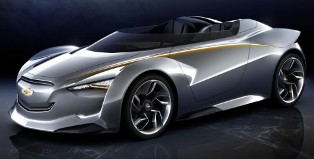 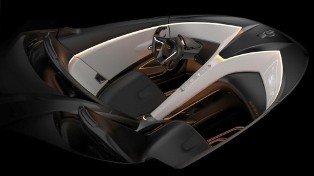