Up and coming in the lesser known AutoRAI show in the Netherlands would be Jaguar’s platform to showcase their new vehicles. This is where they will be putting up the replacement model of the Jaguar X-Type model which they are making some customizations for the Dutch market which they called the Designer Edition.
This will come in 2 forms, namely XF and the XJ which are fitted with the 3.0 liter V6 engine and is painted with the new Stratus Grey London colour which is predominantly green. It is also given a tan leather inside as well as piano black lacquer trims. Jaguar announced that they will only be making 20 units each of this variants and they are selling it at €77,790 for the XF while the XJ will be sold for €121,290.

Among the differences between the 2 models are in its bi-xenon headlights in the XF Designer Edition which also comes with either grey or black 19 inch wheelers. Apart from that, they have also fitted in heated leather steering wheels and windshield as well as sports seats into this one. On the other hand, the XJ Designer Edition gets you a Bowers & Wilkins Audio system, a high-definition dual-view touchscreen multimedia and driving information system as well as a TV Tuner included in. 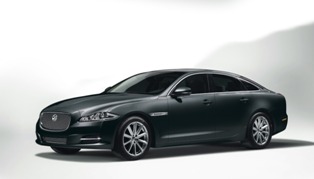