Here is another cool video which tells you that even the fastest car in the world has their down days.

This is the story (or video) that showed a £100,000 Lamborghini crashing into a motorway barrier in Taiwan and avoided hitting other cars in one of the most dangerous high speed accidents captured on video.

The footage involved 4 supercars making their swerves and overtaking each other on the public highway in the northern region of Taiwan while the green Lamborghini hit the central reservation after spinning a semi-circle when the driver lost control of the supercar. This was when the green Lambor tried to avoid hitting onto a slower moving vehicle and then the whole highway went into a frenzy trying to avoid the car. This followed a recent report of a 14 car pile up crash that involved Ferraris and Lamborghinis in Japan although the extent of the accident pales in comparison.

Fortunately, no one was injured in this accident but the miraculous thing is that the guy filming the whole incident managed to avoid hitting anything while capturing the whole episode through this windscreen.

In another unrelated incident, David Dopp, a 34 year old truck driver hit the jackpot when he won a US380,000 Lamborghini in a convenience store contest where he went out and crashed the green Murcielago Roadstore some 6 hours later. It was said that he did not want to keep the car as he could not afford the maintenance of the super car. Hence, he will be selling it off to any suitors interested in a wrecked green Lambroghini. 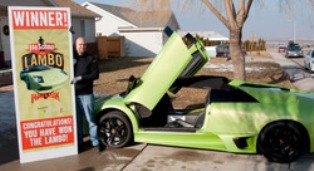 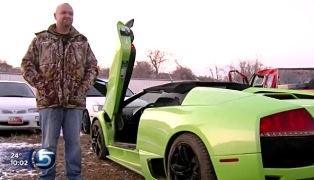