Local motorsports boy Jazeman Jaafar will be going off to France where he will be sitting behind the wheels to contest in the first round of the 2011 Speed EuroSeries. The race is set to take place at the Paul Ricard circuit at the end of the week which will be very good exposure for Jazeman who is involved in the International British F3 series.

He will be manning the Lanan Racing Ligier JS51 Speed EuroSeries car where he will be driving alongside Bruce Jouanny who is also his regular drive coach. This will be the first time the partnership will be set in motion using the 2.0 liter Honda powered car paired with a SADEV 6 speed sequential transmission gearbox that gets up to 246 horses. It comes fitted using an extruded aluminium chassis as well as a crash-box made from carbon fiber.

The Speed EuroSeries is a race series that use sports prototype that involve sprint and endurance two-driver races. It will total in 5 and a quarter hours running where the 2 partners will be sharing. It will involve a 1 hour free practice session before the qualifying session which will be 45 minutes take place. After that, there will be 2 90 minute races on the next day and then on the following day, a 30 minute sprint race will take place.

The 18 year old motorsports racer said that the opportunity was put to him in the last minute and he took without hesitation because he has not been to the Paul Ricard track and to race there would give him a good headstart on what to expect when the British F3 circus gets there in July. Furthermore, he will also relish the chance to race along his mentor where apart from competing against each other, he could surely gain some very valuable perspectives from Bruce. He also said that participating in the race would give him good and valuable information about the track and that is the main priority for joining. At the end of the event, he hopes to be able to understand the track better to help him when it matters most during the F3 season. 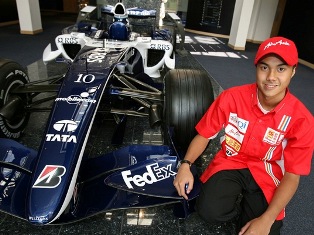