BMW has unveiled their sixth model to join the new Mini lineup which is the new Mini Roadster following the recent release of the new Coupe, this would become the top down cabriolet version.

The Coupe, which was brought into our shores not too long ago now has a new member where the Roadster is now officially the first mass produced, 2 seater open top model.

Now if you recall, there was another convertible version but it was a four seater so it’s a different model altogether. Generally, it looks every way a Mini so one would not deviate too far from driving this icon. The car is 20mm lower than the 4 seater Cabriolet and this is where you get more space in the boot without the back row seats. One cool feature of this beauty is there is active rear spoiler which comes out automatically when the speed reaches 80km/h.

It comes with 4 different engine versions as with most of the other models namely the Cooper Roadster which gives you the 1.6 liter engine that gets you up to 122 horses, the Cooper S Roadster that with its turbo gets you to 184 horses. The John Cooper Works version tunes up the engine to 211 horses while there is also the SD Roadster that boosts out 143 horses. 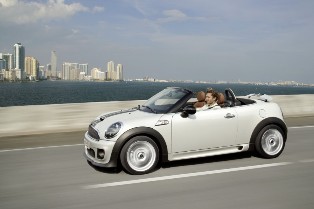