National carmaker Proton Group Holdings has launched 2 new centralized logistics hubs. This was done through its subsidiary and dealer network company Proton Edar as well as Konsortium Logistik Berhad (KLB), their logistic provider where the 2 new centers will be located in Sijangkang and another one in Tanjung Malim, home to their manufacturing plant. KLB is the company that Proton Edar outsourced their delivery management system too since last April.

The hubs will give the company a boost and a competitive advantage by offering a better and more efficient delivery system as well as a centralized supply chain. Former prime minister and the advisor of Proton Tun Dr Mahathir Mohamad launched the new hubs named CLASS or Center for Logistics, Allocation, Storage and Services recently at the Sijangkang center.

This means that Proton can now send their cars from the Proton Shah Alam manufacturing facility to Sijangkang where it will go through the staging, storage, pre-delivery and pre-shipment inspection processes. After that they will be loaded onto the trucks where it will then be distributed to the dealer outlets.

Meanwhile, the same process will also take place in the Tanjung Malim plant which also houses its own CLASS hub. Apart from that, the CLASS hubs also provide logistic planning, vehicle storage, stock storage maintenance services too among others.

The Sijangkang hub started operating last April where it could accommodate up to 7,000 cars at any time while the Tanjung Malim facility is able to accommodate up to 6,000 units. Both the hubs remarkable delivered 14,573 units to its network in April.

According to Datuk Seri Syed Zainal Abidin, the Managing Director of Proton Group, the company would not be able to maximize its efficiency in terms of logistics as the costs and delivery time are reduced. With that in place, they can spend more time and focus on increasing their customer’s satisfaction both in the local and global markets respectively. The significant change with the new hubs is that pre-delivery inspection was done previously at the service outlets before the customers receive their cars. This means that when the car now gets to the service outlets, they are checked and ready to roll. 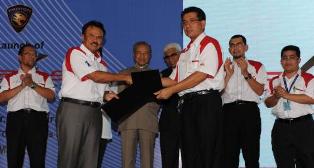