For a look of the future and perhaps how things are going to be from now on, the Rinspeed BamBoo seemed like the ideal choice particularly for golfers. Seriously, take a close look at this one and you will know what we mean. Put on show at the recent Geneva Motor Show 2011, this electric golf-cart seemed to be what the future is like and they have put out quite a revolutionary design considering that you can also use this for outings or picnics as well.

The BamBoo is typically a 4 seater cart which, if you look at the photos which were released seemed more for the young, urban summer loving crowd than that of the more serious golfing segment. It comes powered through it 54kW electric motor that top speeds at 75 miles per hour while the battery pack is reported to be able to get you up to a maximum of 65 miles. Looked very much for the vacation planner, designer Frank M. Rinderknecht pretty much had that in mind when coming up with the blueprint.

Somehow, it resonates the looks of a more retro approach with pastel based colour scheme donning the body of the car which gives you more of the impression of a holiday than golf.
Rinderknecht developed this with 4erC and Esoro, the Swiss based engineering firms and they brought the terms innovation to a whole new level with this one. It comes with some sort of a canopy which makes it less formal and gives it an open ended persona. The inflatable roof was fitted in thanks to Tecnotex, also another Swiss based company while they used a beach motif to colorize the outside of the roof.

They also included their own ‘Identiface’ system which is developed by MBTech, the Stuttgart based Daimler owned company which offers the control center of the vehicle. It also has an internet connectivity that keeps the occupants of the car up to date via Facebook, news and such. On top of that, the ‘Bam-Boo Community’ platform is accessible here which naturally is its own social networking system. This vehicle looks revolutionary whichever way you see it and they have a name for almost everything that they fit in here like ‘Rizzi Bird’, ‘Aha Radio’, ‘Bread bin’ and cool features like that. So ultimately, it is plain ‘cool’ here. 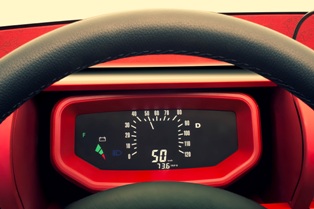 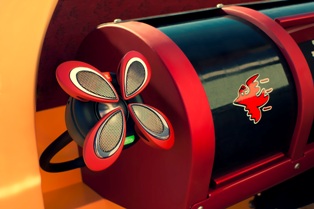 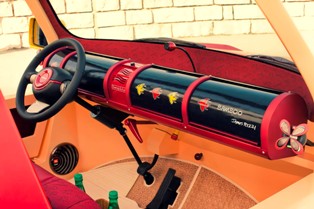