Subaru Malaysia has launched the iconic Subaru WRX STI and it would be the sedan version of this highly popular model.

Coming in new in this one would be a new bumper design and the large rear wings which prove to show that they are not taming the speed monster anytime soon.

It comes with the 2.5 liter boxer engine which means that you can rest assure of its 300 ponies ride which is paired with either the 5 speed automatic or 6 speed manual transmission gearbox on its AWD (All-Wheel Drive) platform. Apart from that, it also comes with the Multi-mode VDC or Vehicle Dynamics control System which means that the driver basically controls the traction control of the car. Priced at RM249,000 on-the-road and a CKD version is seemingly in the cards.

Subaru, if you haven’t already know has been promoting the new BRZ sports car of late and this represents a change in its product positioning especially with the omitting of the Impreza name and the fact that it is not a hatchback will surely mean that they are looking over their shoulders with the Mitsubishi Evolution sedans as their close competitor. For now, feast your eyes on the CBU model while the cheaper CKD might just be turning around the corner soon. 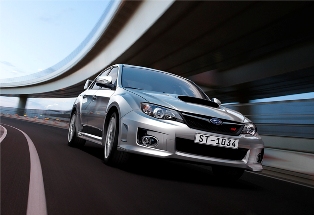