While China has its Shanghai Motor Show, another big show is currently ongoing in New York and Suzuki has taken this show to unveil their new gas-electric concept model, the Kizashi EcoCharge Concept. It is a futuristic yet practical model which could further extend the company’s effort in the hybrid market. Where this is concerned, the area of hybrid cars have been the area of focus for most automotive manufacturers in recent times, what with the rising price of fuel as well as the diminishing of such materials globally.

The Kizashi EcoCharge Concept is powered up through a 2.0-liter inline-four gasoline engine which will be complemented with a 15-kW motor/generator which is wired through to a 115 volt lithium ion battery pack running on its advanced electric propulsion system. Compared to the current Kizashi, the EcoCharge Concept is recorded to have a 25% superior fuel economy. At first glance, despite being a concept model, it looks every way like a usual sedan model and it is in the driving and the opening of the hood that one would be convinced that it is an eco-friendly model. This means that Suzuki might just be planning to roll this out to the masses. After all the green stripes on the engine pretty much tells you that it is all about green technology with this one.

It also use various fuel-conserving and economical technologies which include the currently pouplar automatic engine shut-off and turn on system, regenerative braking system as well as adopting low-rolling resistance rubbers. A 6 speed automatic transmission gearbox is fitted to control the engine amidst the simple and practical vehicle. Apart from that, the blue illuminating lights on the headlights, the number plates are also further indication of the intention of this model.

The exterior body of the car is painted with white satin with blue undercoat. This concept also comes with an LED fog-light on the front fascia while its handling are further enhanced by aluminium wheels which are known for being lightweight but very strong. Apart from the engine, which is obviously eco-friendly, they have also used materials that uses 84% less energy to produce like the seats. 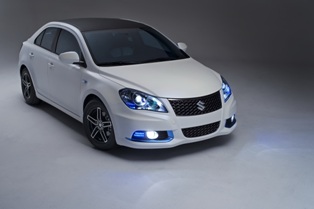 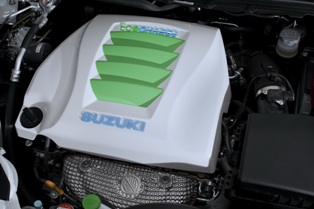 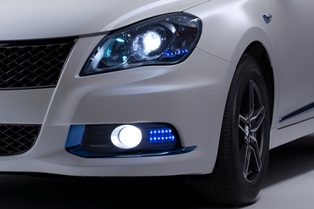 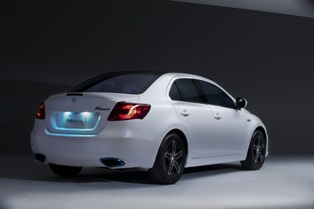