The 1Malaysia Racing Team, Team Lotus, led by team principal Datuk Seri Tony Fernandes has finalized the acquisition of Caterham Cars, a renowned and very much established British sportscar maker, known for its Seven, the legendary sports car. The purchase was completed by Fernandes together with Datuk Kamarudin Meranun and SM Nasarudin SM Nasimuddin, the team behind the Team Lotus Formula team and the legendary Seven will continue to develop under their stewardship.

Caterham, if you haven’t already know, are the makers of the 2 seater Colin Chapman Seven since 1973 where the model will continue to be developed led by Ansar Ali, the Managing director fo the company. He said that while the past has seen the Seven and the brand banked on reputation and legacy, the acquisition will ensure that such heritage will be remained and it would surely benefit the Formula 1 team. Apart from that, they will also be looking to expand the product line of Caterham of its Seven and the SP/300.R and move it towards a more global brand.

Fernandes believe that with another British motor sports brand joining Malaysia would be beneficial for both parties as it is already well established in many regions including Japan, Australia, the Middle East and Europe, coupled with the experience and expertise the new team brings on board will surely propel the brand to more global exposure and success.
How it will affect the Team Lotus Racing Team remains to be seen where Colin Chapman is also the founder of Lotus cars, so it might just be another move towards securing the naming rights of the Lotus name for Team Lotus. After all, the naming rights of the ‘Lotus’ name is still currently on trial between 1MRT with Proton, the custodians of the Lotus Renault Formula 1 team. But having said that, one cannot discredit the fact that with the purchase of Caterham, that is another brand in Malaysia ownership which is a remarkable achievement in a short time for Fernandes and team.
In commemorating the memorable event, a special Team Lotus Sevens will be made of which 25 will be catered for the UK market and 25 more for other markets. It will be wrapped with the standard Team Lotus yellow-green livery so is pretty much a limited and special edition of the highly popular Seven. 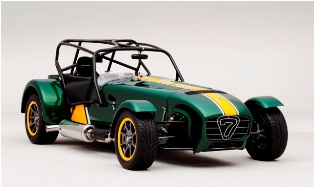