Here’s something really cool and interesting. Showed recently at the Commercial Vehicle Show at NEC Birmingham is the 2011 Volkswagen Racing Cup (VWRC) contestant, the Volkswagen Caddy Racer. Now if you don’t know what we are talking about here, it is basically a Caddy van and it is used for racing. Get that? Yes, that is right, basically this is very much a commercial vehicle being converted into a racing car. If you think that it some sort of a joke or perhaps a hobby of a racing enthusiast who could not afford a proper sports car, then you are wrong because this is developed by Volkswagen themselves and they are very serious about it.

The VWRC was first seen 7 years ago and it is seriously a very fast car in the shape of a caddy van and when it goes onto the grid at Oulton Park it will have its following which have been gathering over the years. After that, it will head out to Snetterton, Brands Hatch, Donington Park, Holland’s Zandvoort and then will head back to the UK where it will have its season finale in Silverstone.

The VW Caddy is very much popular for being a people carrier or a commercial vehicle and the company has decided that it could also be a great racing vehicle. The pictures you see is the latest version with enhancements made to the car both inside and the outside. It now gets the 2.0 liter, 4 cylinder petrol engine which replaces the 2.0 liter diesel engine used last season and it now gets you up to 270 horses. The engine is mated with a 6 speed Volkswagen Racing quick shift transmission gearbox that channels power onto its front wheels.

Apart from that, they have also upgraded its rear axle using a multi-link system which is a similar set up in the Golf for better agility and handling. It is also fitted with a Milltek Sport bespoke exhaust system, Cobra Racing seats with a 6 point Sparco harness. For racing purposes, the ABS has been deactivated where it is also fitted with Hankok racing slick tyres on its 19 inch Team Dynamics alloy wheels. With all that in view, you could now imagine that the pizza delivery in future could get your food in 10 minutes or less, with the help of 270 horses of course. 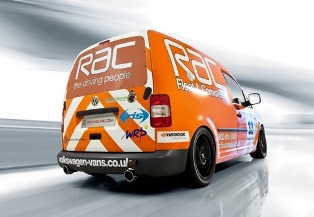