BHPetrol has launched their new petrol line called the Infiniti Advanced 2X 95 and 97. The company is adopting the tagline that not all petrols are the same and they are promoting this by claiming that it is the additives that make the difference among all petrol brands. The new RON95 and ROM97 petrol are developed using the Advanced Double Strength Formula that includes the AAC or Advanced Additive Compound.

Using German technology, they have set the maximum recommended 800 parts per million treat rate which supposedly would provide more power, better fuel economy at the current price rate. These quality additives would clean up the hydrocarbon deposits which result in the intake valve where it would prevent any fuel injector clogging thereby giving drivers a better and more efficient running engine.
To fan more people to try out their new products, BHPetrol is launching the Infiniti Fever Frenzy II contest, where you would be able to win the grand price of a new Proton Inspira as well as cash prizes of up to RM30,000. All you need is to spend a minimum of RM30 of petrol at all participating BHPetrol stations, answer 2 simple questions and send in your forms. From there you will standa chance to win a car or the cash prize every month from April to July 2011. Apart from that, the Grand Finale will be held in July where there would an additional 10 Apple iPads, 5 40 inch Sony LED TVs and 500,000 ePoints up for grabs. 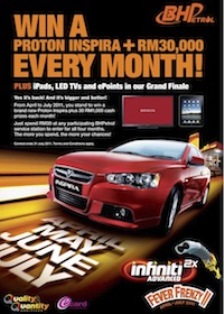