The manufacturers of the world’s cheapest car, Tata will be rolling out an improved version of the Tata Nano for 2012.

This is meant to give buyers a better option from the lackluster sales of the car despite its low price tag. The new version will be made to be more economical and more powerful while maintaining the low price point that it is so known for.

The new Nano 2012 will come with a more powerful 624cc engine and they claim it to have the best fuel consumption in its class where it can reach a top speed of 105km/h. Apart from that, they have also made improvements in other parts and particularly in the handling of the car which include a new suspension system that comes with an anti-roll bar in front.

New and funkier colours like the Papaya Orange, Neon Rush and the Mojito Green will raise the chic factor with this one where it can be seen as cooler and more contemporary. Sold in India for Rs. 1.40 lakhs for the Nano Standard which is around RM8,500 and Rs.1.70 for the CX version, Tata announced that there will be no price changes in their new model which means it will remain as the world’s cheapest car. 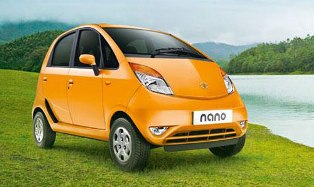